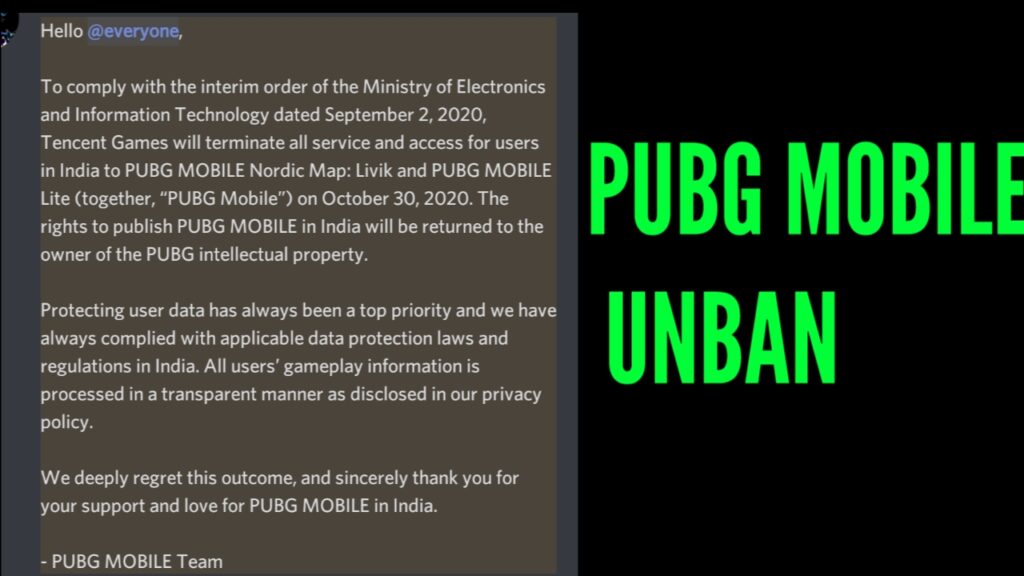 To comply with the interim order of the Ministry of Electronics and Information Technology dated September 2, 2020, Tencent Games will terminate all service and access for users in India to PUBG MOBILE Nordic Map: Livik and PUBG MOBILE Lite (together, “PUBG Mobile”) on October 30, 2020.

The rights to publish PUBG MOBILE in India will be returned to the owner of the PUBG intellectual property. Protecting user data has always been a top priority and we have always complied with applicable data protection laws and regulations in India.

All users’ gameplay information is processed in a transparent manner as disclosed in our privacy policy. We deeply regret this outcome, and sincerely thank you for your support and love for PUBG MOBILE in India.

It means that PUBG Mobile will not be accssable by any user in India. Also the indian version game might releasing. And the unban of game is near and might be returning soon in India.

As we all know that

Earlier on September 2, 2020. we got a heartbreaking news that PUBG Mobile has been banned in INDIA along with 117 Other Chinese apps. After the ban, PUBG Corporation break ties with its old Publisher Tencent. After this, Many rumors were spreading But one of the rumor that spread was of PUBG partnering with JIO a Indian Tech Giant. So the news is spreading like Corona Virus. But according to some source PUBG CORP can partner with jio and Bring The most popular game back to India. And the latest rumor about the unban was AIRTELxPUBGM Collab.

After that PUBG Mobile announced about Job listing for on their LinkedIN account.