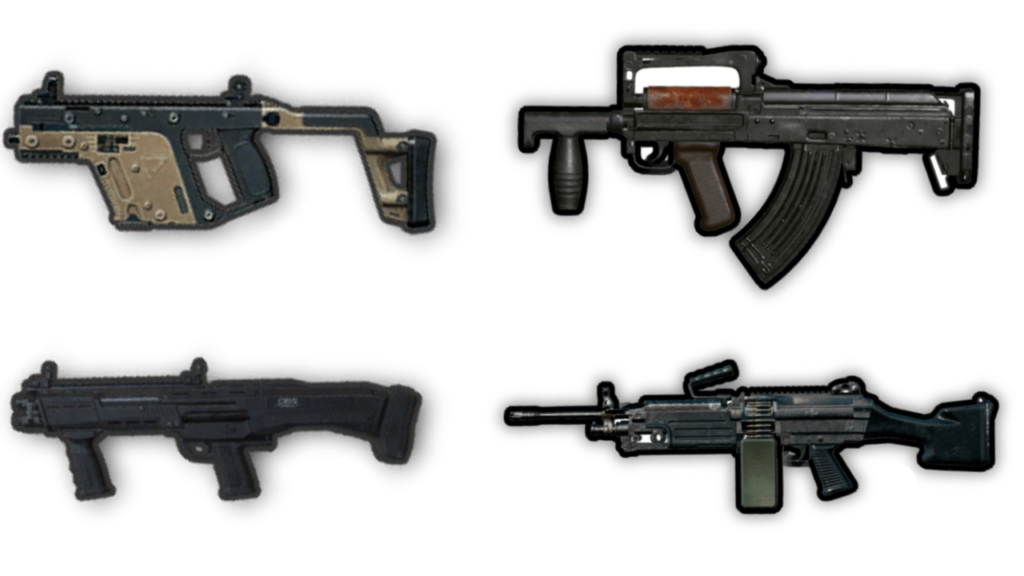 Here are the top ten best close range gun in PUBG. The list of guns is based on the damage per bullet, rate of fire, and damage per second. The gun with high damage with a high rate of fire is more powerful in PUBG and PUBG Mobile

Vector is an SMG with very low damage but a high rate of fire. It has the lowest damage of all guns. But the very high rate makes the gun powerful. The reason for placing the gun at the 10’th place is that the gun has a very high rate of fire and because it is an SMG it has very low hip fire recoil. Which makes it 10 in close range gun. But the drawback of the gun is that it can kill only one person in one magazine. So in a solo vs squad situation vector is not powerful enough to deal with the situation. Also, the gun required an extended mag. Without it the gun is useless.

The most powerful SMG in PUBG. UZI has higher damage, a higher rate of fire and lower reload time and low hip fire spread than a vector. Unlike Vector UZI is powerful enough to knock or kill two people in one magazine. Like vector UZI also requires extended mag. Because it has 25 bullets. Also, UZI cannot kill an enemy wearing level 3 gear without extended mag even if a player hits all bullets in the enemy.

Scar-L is one of the best common guns found in Erangel and Miramar in PUBG Mobile. This Gun uses 5.56mm Ammo and can be equipped with most attachments found. The specialty of this is the lowest hip fire recoil in all AR, which makes it a good weapon in close range. With good experience a player and defeat an enemy holding AKM and Beryl M762. Only drawback of gun is low rate of fire which makes it DPS very low. Making it 8th in close range gun.

The gun can be used in close range. With the Damage per second of 502 this gun offers a higher DPS than AKM The gun can be used in close range. The M416, is one of the best gun in PUBG.  This is a most commonly found Assault rifle which is found in all Five Maps in PUBG MOBILE and PUBG. The gun is mostly known for its handling and stability with high rate of fire and is best for the long sprays. It uses the 5.56mm of ammo with 30 rounds extendable to 40 rounds. M416 has higher Rate of Fire than Scar-L with Better stability. Making it 7th in close range gun.

DBS is the most powerful shotgun in PUBG and PUBG Mobile. It has the lowest pallet spread and requires no attachments. DBS is similar to a double Barrel Shotgun but unlike it, DBS does not take too much time to reload. Also due to high magazine size, a player can also wipe a full squad with DBS only. Also gun has very high damage and high rate of fire than any other shotgun, This is the reason to put the gun at 6’th place in close range gun.

AKM is a beast gun in PUBG. The gun uses 7.62mm of ammo and is one the best gun for close range. The Gun has the highest damage per bullet in AR which is similar to Groza (49). AKM has High recoil and Less Stability but Easy to control in close range. This gun is like a punch of a giant man with low rate but high damage. A Suppressor and a red dot sight is best for close range use. Also AKM has the highest spawn rate than any other AR and can be found any where in all five maps.

The most used gun by Experienced PUBG players for close range. The gun uses 7.62 of ammo and has the base damage of 47. With the rate of fire similar to M416 the gun has very high Damage per second. The gun has very high recoil, low stability, and many attachments are required to use this gun perfectly. Unlike AKM this gun has slightly lower single bullet recoil but very high rate of fire makes the recoil little bit uncontrollable especially for new players. This is the most powerful world spawn gun with high rate of fire and DPS. This gun is like M416 but with high damage, high recoil and slightly lower stability.

At the 3rd place here comes a DMR. MK14 is an airdrop exclusive gun is only DMR which has auto firing mode. The rate of fire of gun is very high and damage….. MK14 has single bullet damage of 61 which is the third-highest after AWM and crossbow. The main reason for placing the gun in 3rd place is that low magazine capacity. Which is the drawback of guns. But MK14 can kill even 4 players in a line with 20 bullets. And that’s why it is the best close range gun in PUBG. But without extended it’s just a DMR.

As we said earlier, MK14 has low magazine size so on 2nd place we placed M249. This airdrop exclusive   gun uses 5.56 of ammo with a magazine size of 100. The base damage of gun is 45 and with the highest rate of fire, the DPS of gun is second highest. M249 has very low hip fire spread. M249 is the only gun by which a player can wipe a full squad without even reloading. High mag capacity, high rate of fire, high damage makes a gun a beast.

The most powerful and best AR in PUBG and PUBG Mobile. This airdrop exclusive gun is a mixture of 3 other Assault Rifle- M416, AKM and M762. The stability like M416, high damage like AKM and high rate of fire like M762. Groza uses the 7.62 ammo and have base damage of 49 which is equal to AKM but the higher rate of fire makes the gun a beast gun. The gun is available in all five maps. Groza has the highest Damage per Second (DPS) of 614 which is the highest of any AR in PUBG

5 thoughts on “Top 10 Close range Guns in BGMI and PUBG.”