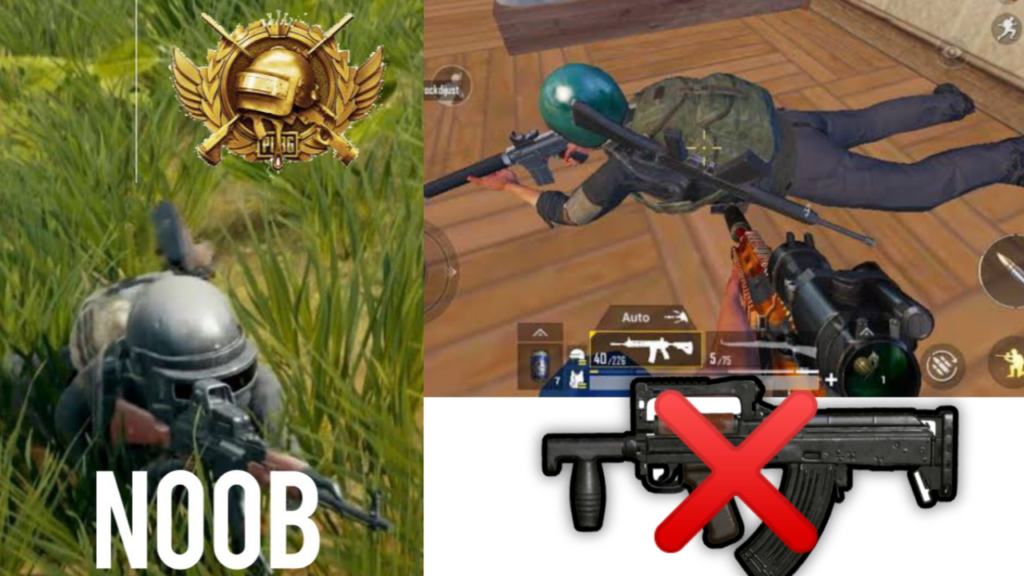 Top 10 noob mistake that noobs do in PUBG. Every PUBG player is not perfect. Everyone learns from their mistake. So here check out ten noob mistakes done by PUBG players.

Becoming snake is a one way ticket to lobby and a big noob mistake in PUBG. In many teams in PUBG Mobile there always a player who whenever saw an enemy, becomes snake. They never help their team. They just become snake. And many people become snake in last circle. This is the worst strategy in the endgame. Because you are a snake and if a snake got spotted then there is no chance of surviving. So if you want to win in last circle hold a good position where there is enough cover for you, and if you have a vehicle, then drive it all over the circle, because it’s very easy to spot enemy from a car.

Second noob mistake In PUBG is camping. Many players camp in a house without any footsteps. And when an enemy arrives they kill them. But this methods works when only one enemy comes. Because when a team comes to hold a compound, campers have no chance of surviving. They can’t run away, they can’t fight them because they just knew only one thing camping. So best way is to rush other campers and kill them. If you rush other camper then your killing skills will also increase.

Third noob mistake is running in Open. Most of the time after killing enemy many players often runs towards the crate to loot them. And sometimes they got killed by campers who was waiting for them far away. In PUBG every gun had some sound which might have travelled far distance can attract other team. While fighting a squad or any other team, you should keep in mind that other players also heard the sound of guns you fired and they can come to kill you. So be careful while looting enemy’s crate after killing them.

Many players in last circle leaves their car and start running in open or become snake.They thinks that their car will expose them. It might sometimes but not all the time. Sometimes while in a last circle when 2-3 teams are remaining can kill you as you are the only target to 8 players. But many times car can save you from snakes and it can even help you in spotting snake and sometimes a car can be used as a cover while in an intense fight situation.

Whenever while holding a compound in solo or squad always keep the car safe. Many times if enemy can’t hurt you then they always tries to damage your car, so that you will unable to go in Safe zone. So keep the car away from enemy. Even when you park the car in the direction of enemy first try to save the car. Put a smoke grenade on it and then park it on other side. Then start fighting.

Using wrong guns means using guns that does not belong to that use. For example, using beryl M762 for medium range spray or using a shotgun for mid-close range. Every gun in PUBG can kill enemy but that does not mean that you can kill a player having GROZA with UMP45. First choose which gun is best for close range and which gun is best for you. First of all choose which gun you need and which gun you can handle. Check out Top Ten Guns for close range .

Andha Rush or Blind rush means like rushing without any information of your enemies. Imagine, while fighting a squad you knocks an enemy and rushes directly without knowing how much enemies are there or where they are holding and you got killed. In this situation you know nothing about your enemy and still you are rushing them. So first try to spot all positions of enemy and find how much enemies are there then rush.

Many peoples doesn’t think it’s a mistake but it is a mistake. Many peoples focus on killing bots for increasing k/d. Most of the time they kills a bot quickly doesn’t even caring about the situation. They doesn’t care in how much intense situation they have stuck they just wants to kill bot for saving their k/d. and sometimes by this they got their whole team killed.

While landing at place always pick a place where no one is landing and avoid early gun fights so that you might get chance of surviving. Gun fight is a game of luck, one who will get gun will survive. While landing in hot drop always try to see where your enemy are landing and land far from them. First loot, find weapon get well armed then engage a fight by doing this both teams will fight equally and game will be more fun

The biggest noob mistake almost every player do is underestimating enemies. Most of the time players underestimate their enemy and thinks that they can kill them easily but the result happens opposite. They got killed by their enemy. Just like underestimating enemy overestimating enemy is also a big mistake. When many players got scared as they thinks that a full squad have rushed him but in reality only one player rushes him whom he can kill easily. But as he overestimate his enemy he got scare from him and start camping. So basically always try to know as much as possible about your enemy.

And the last tip: Take advantage of enemy’s mistake

While in a combat always try to take advantage of enemy’s mistake. This will help you in many situation. Always keep eyes of enemy’s movement. For example, if an enemy is rushing you from somewhere, wait till he comes in open and then start firing at him. As a result he will not be able to escape because of no cover. And always take a better position, like staying on a higher place than enemy will also help you and you can take advantage.