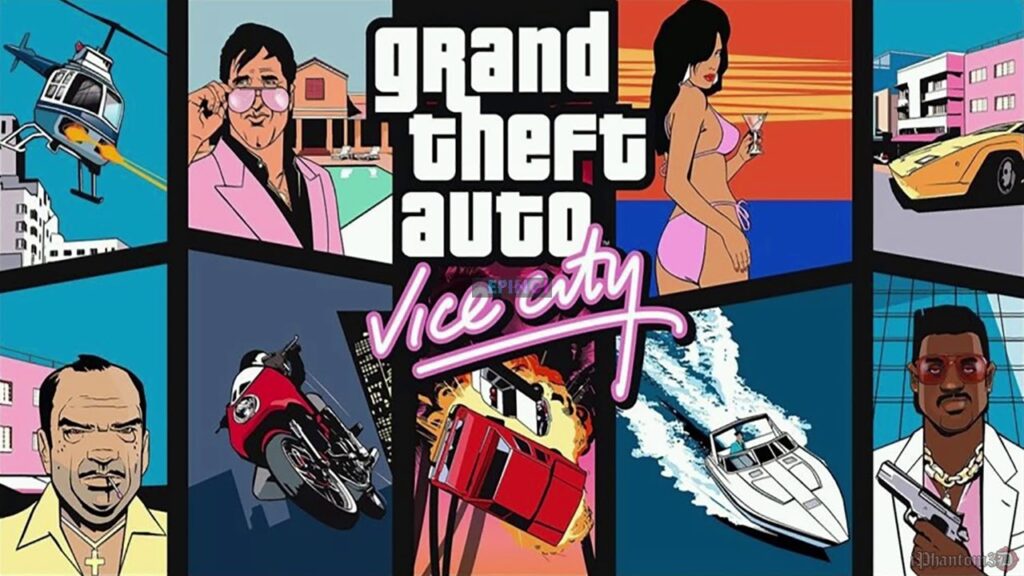 Cheating in Game isn’t illegal until you do it in single player and for your own fun. Here is the full list of GTA Vice City cheats.

Others cheat in GTA Vice City

Other Secrets of GTA Vice City

Go into the Malibu Club and take a gander at the stage. There, you’ll find a reasonable facsimile of the Village People.

The moon changes size when shot at with the Sniper Rifle, just like in GTA 3.

Write down the phone numbers you hear on the radio commercials in the game. They all work! Here’s a list:

After you’ve completed the Malibu mission “The Job” in GTA vice city,  you can rob El Banco Corrupto Grande for some easy money. Walk-in and turn right up the stairs. This will earn you a four-star wanted level. Walk into the manager’s office to get 1/3 of the cash. The rest is in the room with the elevator, on the right side. Then jump off the balcony and run out. To shake the cops, you can turn left to the nearby Pay N’ Spray. It’s not much, but it’s easy to cash.

In GTA vice city if you pick up the regular shotgun at your hideout (from starfish island) and then go out and find the spas or Benelli shotgun out in the city, your 50 shells from the regular shotgun will be transferred to the new upgraded gun you picked up. If you were to pick up the upgraded shotgun without doing this you would only receive 20 or so shells but this way you get roughly 70. This trick works with other guns also that share similar bullets.

Admiral. Also fire-proof, explosion-proof, and collision-proof. Activate the Guardian Angels mission (from Colonel Cortez), and kill the Haitian gang members. The Admiral is the white car Diaz drives in the cut-scene. Deliberately fail the mission by killing Diaz, Lance, or letting the Haitian biker escape with Diaz’s money. Once the mission fails, the Admiral‘s doors will be unlocked and you can drive it back to the garage of your choice. Naturally, you will need to purchase property that has a garage first. Although the car is not the fastest or the best car in GTA vice City it is still better as it is indestructible

Head to the 8-10 VCN Building (the news building) on the west island of the main city of GTA Vice City. The news building is by the northern bridge entrance on the west island. You can enter the door of the news building and head up to the roof. Along with the news chopper, there’s an easter egg you can get to. There’s another building close by, but on an angle with the window closest to the edge of the heliport. Make a sprinting jump through the window and you should see an empty room with an easter egg in the middle.

There’s a Scarface easter egg in the form of a bloody bathroom and a chainsaw weapon. Go to the Pay N’ Spray at Ocean beach, then go south and take the first left. On your left, you’ll see a two-story apartment with two sets of stairs on the second floor. Head up the stairs to the right and you’ll see a black doorway. Check out the bathroom in apartment 3c and compare it to the movie.

Go to Starfish island in GTA Vice city. When heading west, go into the first house on the right. In the empty pool, there is a beach ball. When you run into it, it will bounce. Bounce it on your head and numbers will appear. (The trick is to always be in the shadow of the ball.)

An advantage of buying expensive companies rather than smaller ones first is you can get more money in return. For example, if you buy the Print Works for $70,000, you can get $8,000 dollars a day to make buying the other companies easier. Don’t forget that you have to complete a certain mission in the Vercetti Missions before you can purchase companies, and you also need to finish the missions related to those companies.

While driving the tank in GTA vice city, Turn the tank’s turret around so it faces backward. Now keep firing while accelerating and you will go a lot faster.

He Sleeps With the Fishes

Get a boat… and go between The “Leaf Links” Golf club and the third island. GO up to the rock and stop your boat get the sniper rifle in the cheat and look down on the rocks you will see a man in boxers with concrete on his feet.

Drive over parking meters to empty cash into the streets. It’s free money!

If you want to kill cops without receiving a load of wanted stars in GTA Vice City, use the main blade of a helicopter and angle it so that the blade hits them. You accrue fewer “wanted points” this way.

The trick worked in GTA III also works in GTA Vice city as well. Drive-up next to a hooker and wait. If you’re driving a swank enough car, she’ll start talking to you. Eventually, she’ll get into the car. At this point, drive to a quiet spot and let the magic happen. The car will start rocking, and your “health” will grow from 100 to 125. Your pocketbook will take a hit though. This health-up only works until the next time you die.
Source of Information:
Also READ: GTA San Andreas Cheats

How to find a helicopter in GTA Vice city?

What is the vice city helicopter cheat?

This cheat only works for the pc version of the game. vice city helicopter cheat: AMERICAHELICOPTER.

Where can I find helicopter in GTA Vice City?

It may be easy just type vice city helicopter cheat which is AMERICAHELICOPTER.