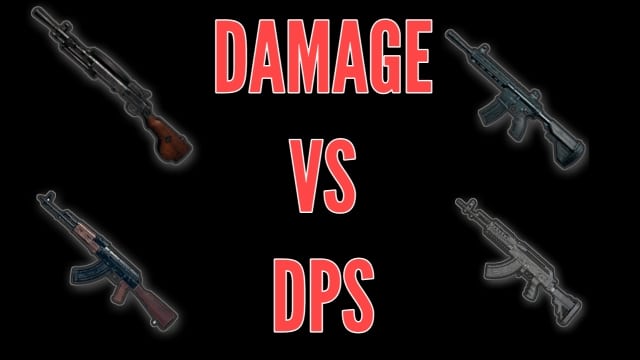 Base Damage vs DPS in PUBG

On Many Websites and apps, you might have seen two words called Damage and DPS (damage per second). So what is the difference between them? Do guns that have more damage are better or guns with high DPS are better. Let’s get to know in this article.

DPS refers to the amount of damage done by a gun in a second if it runs fully automatic. DPS of a gun depends of the rate of fire on the gun. Like UZI has a base damage of 26 and the DPS of 526 as UZI has the highest rate of fire. And the damage of AKM is 49 and its rate of Fire is 0.100. it means it has a DPS of 490.

So the DPS of UZI is more than the DPS of AKM. It means if we fire UZI and AKM on two-person respectively. (Note: Both players are equipped with the same armor.) here UZI will knock the player faster because of Higher DPS. The same thing applies to M416 and other guns. This is the reason why we call GROZA the best gun in PUBG as it has the highest DPS in all guns.

So which gun should you use- Higher Damage or Higher DPS: Damage vs DPS

This is the biggest question by most of the PUBG Mobile players especially. What to use DP28 with low DPS or M416 with higher DPS. So the answer is- both guns work well in a different situation. Let’s consider two different situations for the medium range:

Beryl M762 vs AKM in context of Damage vs DPS

Now you know which gun has which use and what is the difference between Damage and DPS and who won the match of Damage vs DPS. Basically, both are winners. You just need to choose your favorite gun and which gun you can handle.