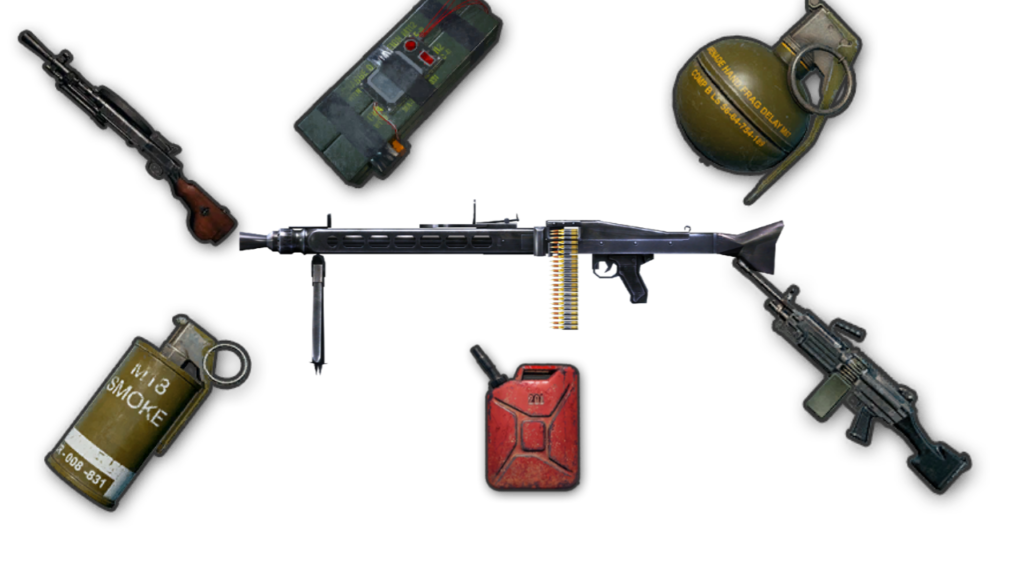 There are many weapon in BGMI which cannot be classified in any category or there is very less weapon in their category like LMG that is only 3.

MG3 is a brand new LMG which is a Airdrop exclusive weapons. It comes to the battleground with super-huge firepower that can blow your mind right away. It’s only spawned in the Care Package crate in the Battleground mode in PUBG. In addition, this new gun will appear in all PUBG maps. it has base damage of 43 with the mag size of 75. This gun is two type of rate of fire 660Rpm and 990 Rpm. 660 Rpm is similar to DP28 and 990 rpm is similar to MPK. Read More about Update 8.2

M249 is the best gun in PUBG. This airdrop exclusive gun is an LMG which uses 5.56 of ammo with a magazine size of 100. The base damage of gun is 45 and with the highest rate of fire, the DPS of gun is second highest. M249 has very low hip fire spread. M249 is the only gun by which a player can wipe a full squad without even reloading. High mag capacity, high rate of fire, high damage makes a gun a beast. The stability of gun is low but recoil is very less and gun is easy to control. In PUBG PC this gun spawn randomly with mag capacity of 75 which is extendable to 150 with higher recoil, less stability and lower damage. Also the gun can be equipped with a stock for better stability.

This is what we call a Laser. DP28 has the lowest recoil in any gun and has highest base damage after MK14 in automatic guns. DP uses 7.62 of ammo and is one of the best weapon in BGMI for medium range. DP28 has very low recoil. Low rate of fire, low recoil and high damage makes the gun perfect for medium range and long range. The only attachment needed in DP is a scope and that’s it. With a low rate of fire and high damage the gun is very easy to control and very good for medium range spray because of high mag size.

Crossbow is a useful weapon in BGMI. It has the highest bullet drop and highest damage after AWM but low bolt speed and very high reload time. It is very hard to use and very difficult to kill someone. Even though it can be equipped with all scopes except 8x and it also comes with an inbuilt scope which is similar to a red dot sight. Crossbow is the only weapon which does not make any noise while fired without exposing your position. With a good crossbow experience you can even kill an enemy behind hill with the use of high bullet drop. But you will need some practise and precise aim. Just like AWM, a crossbow can also burst a level 3 helmet in one shot. It can be equipped with a quiver which reduces reload time.

Sickle is a melee weapon in BGMI with nothing. Only it is better than fist and which is the only benefit of sickle. Also there were many rumour about sickle that you can cut grass with sickle and get a ghillie suit for that.

Just like sickle, machete is also similar and it has second highest damage in all melee weapons.

Crow bar also have higher damage than fist and it also a melee weapon. Crowbar is a useless weapon. The only use of crowbar is to show off your skin of crowbar and nothing else.

Gas can is one of the most useful object in PUBG. Most of the people don’t pick up a gas can because it takes too much space in bag. But gas can is more useful then ammos of guns as you will not need to run in open if you car’s fuel went out. Also a Gascan can also be used as a weapon in BGMI. It can be exploded so next time while rushing a house, keep eyes on presence of gascan.  As enemy might use gas can as weapon to kill you.

Throwables are one of the most useful thing in PUBG. They always helps in all situation and can be useful anytime. Let’s have a look at all throwables present in PUBG.

Grenade is very useful in all circles in PUBG. It is useful during rushing a house and even in last circle for safety. The damage range of grenade is 10 meter. It takes 7 seconds to explode after pulling pin.

Smoke grenade is a life saver in PUBG. It can save your life in most of the situation but sometime it can drag attention of other predators and got you killed. In last circle smoke grenade is most useful and sometimes it can be used for confusing enemy by throwing it in opposite direction.

This is the most underrated equipment which most of the players thinks it is useless. But it can be useful in scaring enemy, confusing enemies because on explode a mark of bullet arrive on map but no sound comes from it if explode far but it causes a flash.

Molotov is also useful as it makes enemies a ghost rider. If a person got burn in Molotov it is difficult for him to escape as it causes very high damage. Molotov is very useful if an enemy is camping inside a shack. As Molotov instantly break down the door.

It is the most powerful thing in PUBG. Currently, C4 is only available in PC and console version. It is the most dangerous thing for campers as if anyone sticks a C4 at the bottom of a three storey building, a player at the highest floor will be killed. C4 has too much power.

Sticky Bomb is only available in Karakin map in PC and Console version of PUBG. It useful in breaking walls and rushing house. As karakin is a Dynamic map, this is very useful equipment.

All Shotgun in PUBG and PUBG Mobile